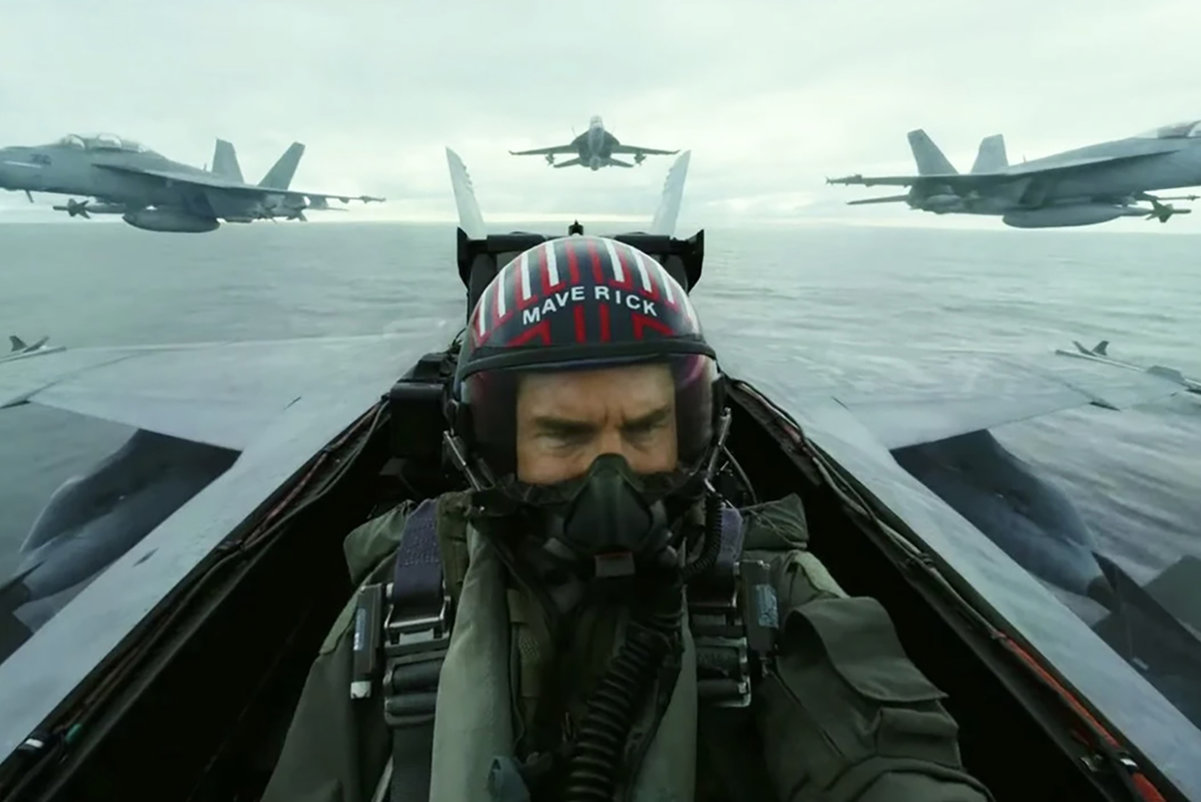 Tom Cruise had starred in a couple of films prior to Top Gun (1986), but Top Gun was arguably his very first hit film. Yes, Risky Business (1983) put him on the map at the age of 21, but Top Gun was the blockbuster that made him a veritable star. After 35 years, it remains his best-selling, original film domestically that isn’t based on another hit property. It also remains in the top top of Tom Cruise films domestically. It was nominated for four Academy Awards, including Best Editing and Best Sound. It won the Oscar for Best Original Song for “Take My Breath Away” by Berlin, which became a number-one song in the United States. In the three decades that followed, Top Gun had become an iconic and oft debated action flick. Being released just prior to Memorial Day, it was seen as a slick and sexy piece of patriotic cinema.

However, looking back at the film with a modern-day lens, it’s easy to see how Top Gun was very problematic. In several ways, the 1986 title was sheer military propaganda. Yes, Quentin Tarantino has a very queer interpretation of that 1986 smash but arguably those involved saw it more as a celebration of machismo, or toxic masculinity, as well as military aggression. Tarantino saw it as a metaphor for same-sex attraction or just utter homosexuality, but, if anything, the attraction was for military might, or perhaps a kind of mechaphilia for fighter jets and similar airplanes. This is underscored by director Tony Scott’s 1986 opening credit sequence, which is an almost orgasmic montage of sailors on the aircraft carrier, USS Enterprise, as they launched and landed a series of F-14 Tomcat planes. Director Joseph Kosinski (Only the Brave and Oblivion) repeats that rather Ra-Ra montage here, so there’s a question of this film being just as jingoistic as its predecessor. 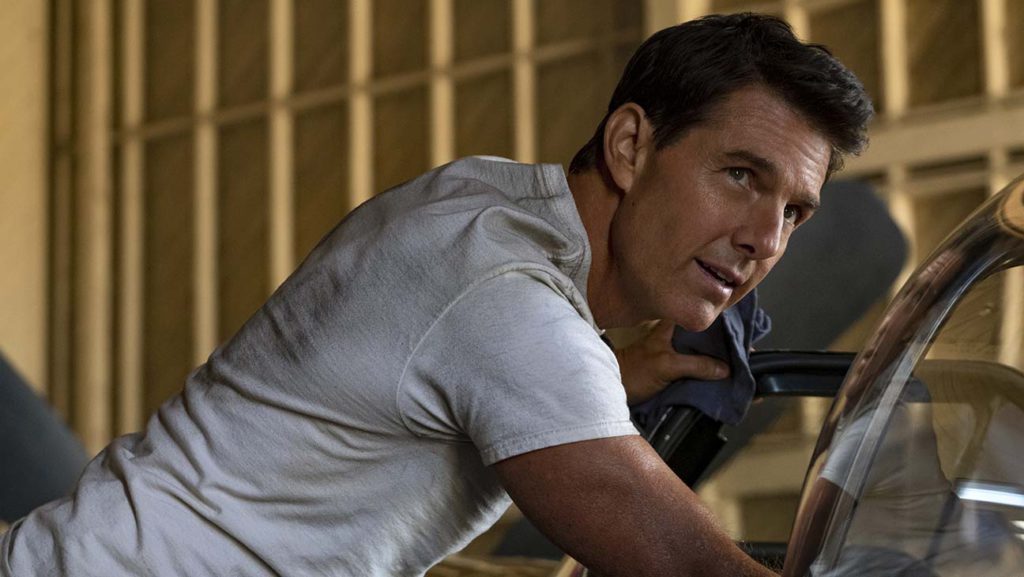 Tom Cruise (War of the Worlds and Mission: Impossible) reprises his role of Pete Mitchell, a US Navy pilot and now Captain whose nickname is “Maverick.” In the previous film, he was recruited to attend what’s called Fighter Weapons School, a training facility near San Diego, California, for the best pilots to learn about aerial combat. It’s an elite school where only the best pilots attend. As such, some of the pilots who attend are rather cocky or arrogant about their abilities, and Maverick was one of them. In fact, his nickname was Maverick probably because he was so cocky, which caused him often to break the rules in order to showboat and preen himself as the best pilot.

All of that cockiness and preening was knocked down a bit when Maverick made a mistake and his best friend got killed. Maverick’s friend was Nick Bradshaw aka “Goose” who was also Maverick’s Radar Intercept Officer (RIO). An RIO is the guy in a 2-person fighter jet who typically sits directly behind the jet pilot. Goose was sitting behind Maverick in his plane during an exercise. Maverick got too cocky and ended up losing his engines, as the plane spun out of control. The plane crashed. Maverick survived but Goose did not, and Maverick has felt guilty about it ever since, even though the Navy exonerated him for it. Miles Teller (Only the Brave and Whiplash) co-stars as Bradley Bradshaw, a US Navy pilot and lieutenant whose nickname is “Rooster.” He is in fact the son of Goose who always wanted to grow up and be a Naval pilot like his father. Rooster was just a boy, maybe around 5, when his father died. This film was conceived in 2010, about 24 years after the original film, so that would put Rooster in his late 20’s or early 30’s, which is older than what his father lived to be. However, it’s only now that Rooster has been recruited to Fighter Weapons School. He probably would have been recruited sooner but his career was put on hold and Rooster was essentially held back because of Maverick. Maverick basically put in an order to stop Rooster from becoming a fighter pilot.

In terms of the mission, it’s not as vague or even as quick as the mission in the 1986 film. The mission in that 1986 flick only comprised about 10 minutes of screen time toward the very end. I didn’t count the time here, but the mission in this film is probably double that length, if not longer. Yet, it’s way more engaging. The 1986 film was Tony Scott’s most successful film in the box office. The ending of this film is dedicated to him because he set the template, which in a lot of ways this film repeats or echoes outright, but Kosinski and his team have done a better job of crafting the sequences in this narrative, including the mission sequence. If this film is nominated in the same Oscar categories as its predecessor, including that of Best Film Editing and Best Sound, those nominations would be much deserved.

The flight sequences in general, of which there are numerous throughout, are quite simply superb and very, very thrilling. I was never quite put on the edge of my seat in the previous film, as I was in this one. A lot of that has to do with the craft of film making at work here, but, a good chunk of it has to do with the writing and acting, which did a lot to make me care about the characters here, at least that of Maverick and Rooster. Cruise has many moments to shine and look cool, but this film has also given him an appropriate amount of time to lay down some heavy emotional beats. His scene with Val Kilmer who reprises his role of “Iceman” is one that almost moved me to tears. 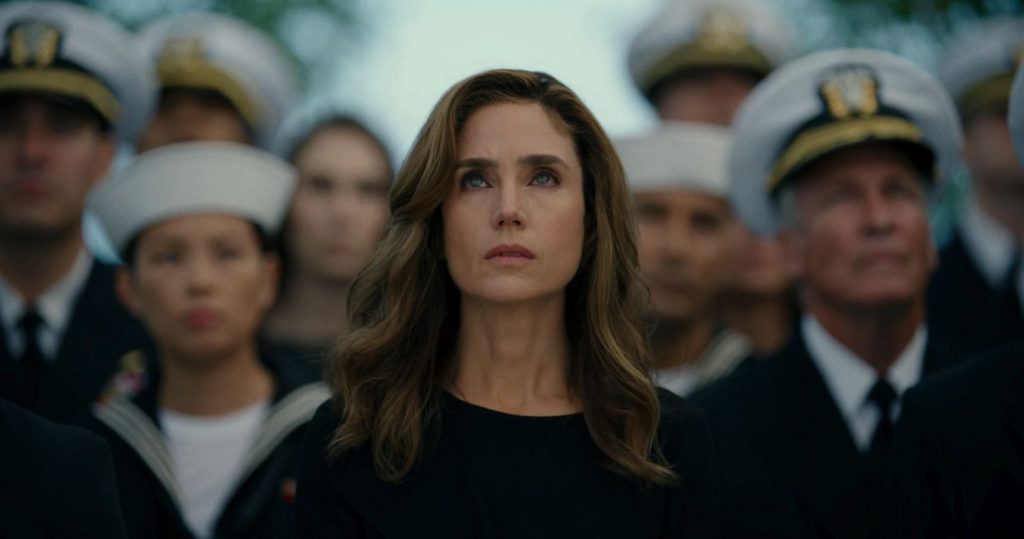 The supporting cast here is also a bit more memorable than that of the previous cast. Yes, Kelly McGillis is replaced with Jennifer Connelly who plays Penny, a less problematic love-interest for Maverick than McGillis’ character. Penny is also a bit more charming and funny as an overall presence here. I also bought the romance between Penny and Maverick more. Of course, there’s a young, attractive cast to fill out the ensemble. The standout among them is Glen Powell (Hidden Figures and Everybody Wants Some!!) who plays “Hangman,” the pilot who is actually the most reminiscent of how Maverick used to be 35 years ago.

As stated, the mission at the end of this film is not as vague or as brief as in the previous. It’s again a mission that is against an unnamed country. Some presume that the country and its enemy combatants in the air are Russian, but the actual enemy is never identified. It’s never stated why we’re fighting this so-called country or enemy. In terms of the characters who are military and trained to follow orders, this ultimately doesn’t matter. However, given the arguably unjust wars that we’ve seen, such as the Iraq War or even the current Russian invasion in Ukraine, not providing some justification or context for these serious military actions feels irresponsible of this kind of film, which has leaned jingoistic. At least, the previous film’s mission was that of a rescue. The mission here is nothing more than a pure aggressive move, one that feels unprovoked. A counter argument though to this film franchise’s jingoism is in its titular character. Ironically, Maverick is one to break the rules, even the rules of the military to do what he feels is right or to save his fellow pilots. As such, one would trust that Maverick wouldn’t go along with a war that was arguably unjust or where the United States was acting too aggressively. We never really get a sense of Maverick’s politics. I would imagine that is so as to not alienate certain audiences. If you want a Tom Cruise film that does critique the military, you can watch A Few Good Men (1992). This film is instead meant to be popcorn entertainment. On that it succeeds. It lives up to the hype that has been surrounding this film since its premiere at the Cannes Film Festival and so it stands as my favorite Hollywood film of the year. 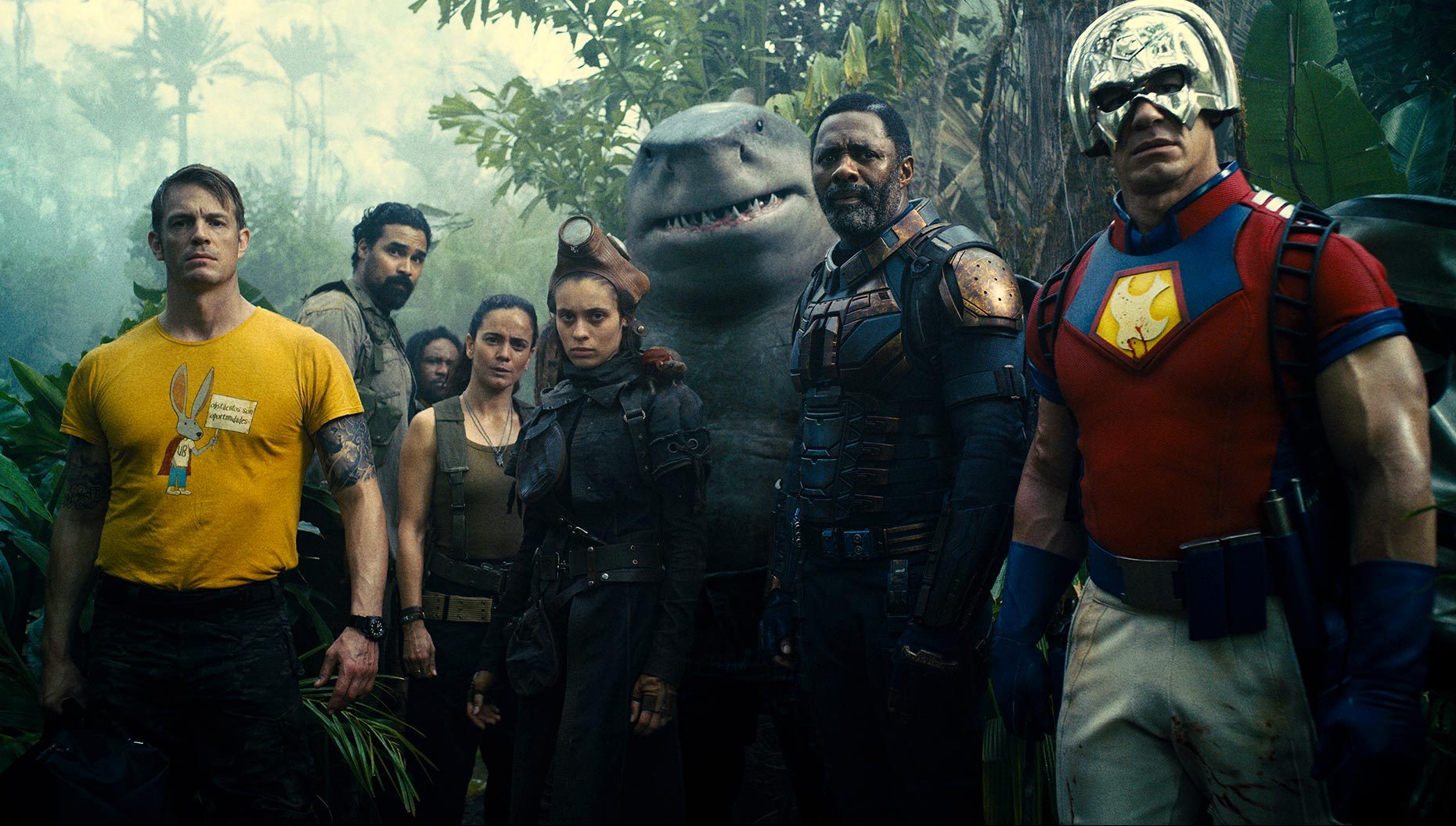 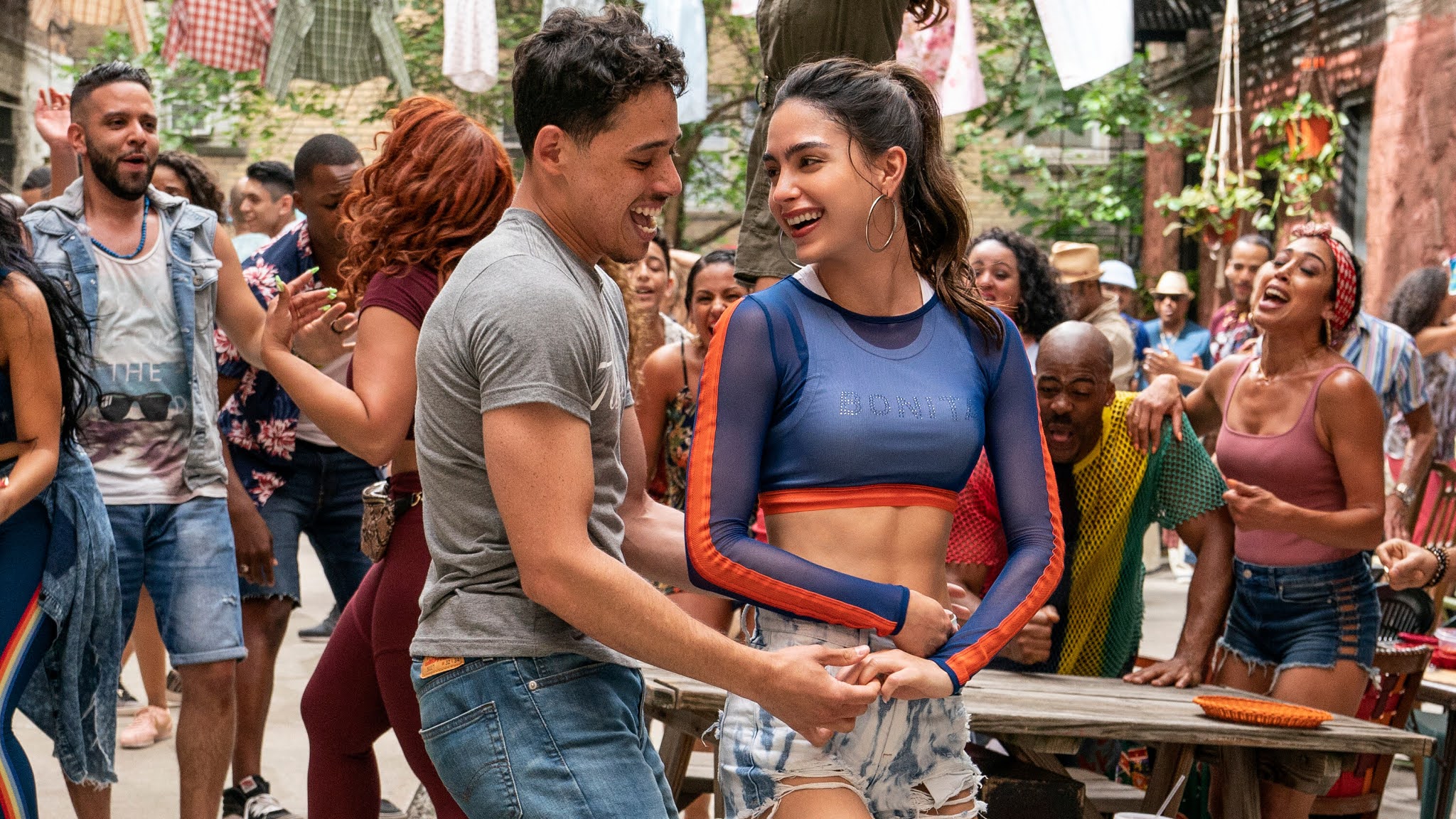 Esteros is a Spanish word for “estuaries.” An estuary[...]