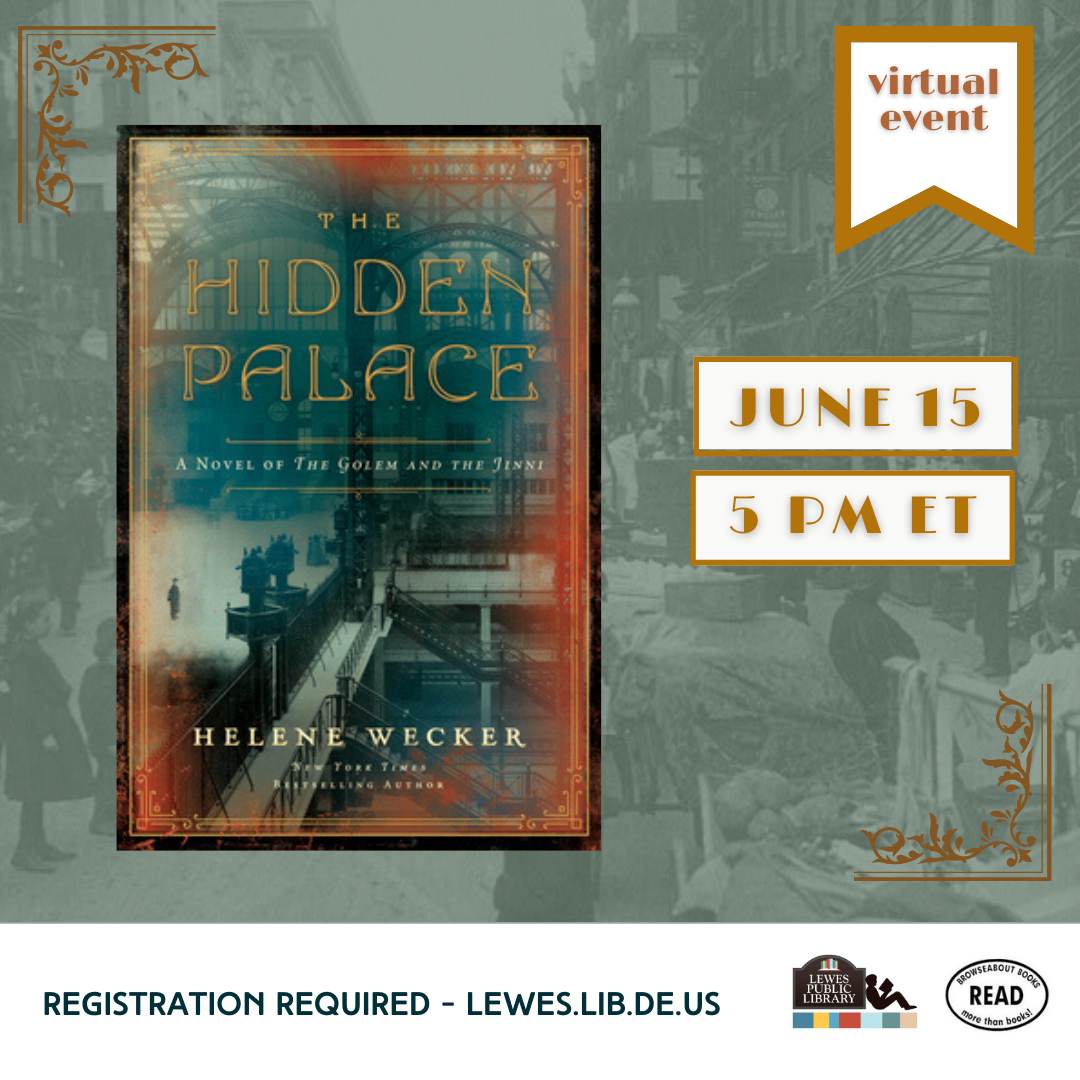 Join us for an online conversation with author Helene Wecker to discuss her new novel, The Hidden Palace, the long-awaited follow-up to her acclaimed New York Times bestseller The Golem and the Jinni. Joining her in conversation is author Monica Byrne.

Chava is a woman made of clay, able to hear the thoughts and longings of the humans around her and compelled to help them. Ahmad is a being made of fire, perpetually restless and free-spirited. Chava was created as a companion to a man traveling to New York from Eastern Europe, but the man died at sea and she landed in New York Harbor utterly alone – a fish out of water who needed to care for herself in the burgeoning metropolis. Ahmad escaped an old flask that languished on a shelf in a coffee shop in lower Manhattan’s Little Syria – the spot behind Trinity Church which is now the home of the World Trade Center complex. Once released, he manifests into the shape of a man with a fiery disposition who is ill at ease in the world of humans. The two meet as unlikely immigrants who spend their time off walking the streets of their new home, New York City, and their lives become intertwined.

Now in The Hidden Place, in the lead up to WWI, these two fantastical creatures must decide what exactly they mean to each other, all the while living disguised as humans and constantly fearing they’ll be exposed for who they really are. Returning to the story is Park Avenue heiress Sophia Winston, whose brief encounter with Ahmad left her with a strange illness that makes her shiver with cold, and new characters such as a tempestuous female jinni who’s been banished from her tribe, as well as a little girl named Kreindel who helps her rabbi father build a golem named Yossele. The Hidden Palace follows these lives and others as they collide and interweave, while at the same time dealing with the challenges of immigration and assimilation and the internal struggle between individualism and one’s community.

Helene Wecker’s debut novel The Golem and the Jinni was awarded the Mythopoeic Award, the VCU Cabell Award, and the Harald U. Ribalow Prize, and was nominated for a Nebula and World Fantasy Award. The novel was chosen as an Amazon Editor Top 20 Pick, an Amazon Spotlight Debut, an Indie Next Pick, one of Entertainment Weekly’s top Ten Works of Fiction for the year, Audible’s Top Debut Novel Audiobook of the Year, and featured in Buzzfeed’s and Kirkus Reviews’ best books of the year features as well as many other national outlets. Her work has appeared in Joyland, Catamaran, and in the anthology The Djinn Falls in Love and Other Stories. A Midwest native, Wecker holds a B.A. in English from Carleton College and an M.F.A. in Fiction Writing from Columbia University. She lives in the San Francisco Bay area with her husband and children.